Granular gases, self-assembled stalagmites, earthquakes, underground explosions, cratering; these are some of the phenomena involving the dynamics of grains studied in our laboratory. Grains-Lab is a group of young people trying to understand the physics underlying the collective behavior of grains. We also study the physics of other complex systems such as active matter, chaos and fluids.

-Felipe Pacheco Vázquez was selected Visiting Researcher at Nagoya University, Japan with Prof. Hiroaki Katsuragi.
-Our master student, Samuel Hidalgo-Caballero, was accepted for the PhD program at ESPCI-Paris, France. Congratulations Samuel.
-Our manuscript about the mechanical properties of magnetocrystals was published in JMMM. Congrats Yesica and Samuel.
December, 2018.
Felipe Pacheco attended the SWGM 2018 in Puerto varas Chile as one of the invited speakers.
​Yesica Escobar and Andrea Cervantes presented oral contributions at the SWGM 2018.
Felipe Pacheco was awarder with the Level SNI II from the National System of Researchers (SNI).

July, 2018.
Felipe Pacheco attended the Gordon Research Conference (GRC) focused on granular matter  as one of the invited speakers. 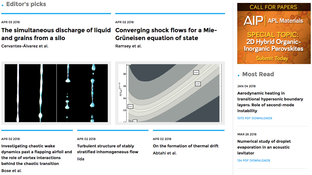 ​Our article entitled "The simultaneous discharge of liquid and grains from a silo"  was selected as an editor's suggestions in Physics of Fluids. see: https://aip.scitation.org/journal/phf).

Felipe Pacheco will attend the SWGM-2018 in Puerto Varas, Chiles, as an invited speaker, see:  http://www.cec.uchile.cl/~granular2018/granular18/Invited_Speakers.html

-Rodrigo Itzamná, Samuel Hidalgo and Alan Yoset were accepted to Master Programs in INAOE and BUAP.  Congratulations!!
-Our article about surface depression during the discharge of grains was published in Phys. Rev. E.
-Andrea Cervantes attended the Hands-On Research in Complex Systems. Trieste, Italy.

April, 2016.
Dr. Felipe Pacheco was accepted  to participate in the 66th Nobel Laureate Meeting, in Lindau, Germany from June 26 to July, 1:  http://www.lindau-nobel.org/meeting/
30 nobel prizes have confirmed their participation in the conferences.

January, 2016:
Andrea Cervantes has joined our lab as a PhD student to work on granular materials and active matter. Welcome Andrea!

July, 2015:
-Congratulations to David Hernández, master student in GrainsLab, who attended the "Hands On Research in Complex systems school at the ICTP (Trieste, Italy) and won the first prize of the  jury's poster award.


-Our recent work "Craters and Granular Jets Generated by Underground Cavity Collapse" was published in Physical Review Letters: see http://journals.aps.org/prl/abstract/10.1103/PhysRevLett.115.028001 . Moreover, the publication was featured as "EDITOR'S SUGGESTIONS" with a synopsis in "Physics" and several media (see "in the news" menu).

March, 2015:
First prize for the best poster presentation to Felipe Pacheco-Vázquez in the "Granular Matter in Low Gravity" conference, at the University of Erlangen-Nürnberg, Germany.

January, 2015:
Yesica Escobar and David Hernández joined to our Group GrainsLab. Yesica will carry out experiments about repulsive granular gases. David will develop molecular dynamics simulations of such systems. Welcome and success!!

December, 2014:
We are very happy!! Our Laboratory has been selected to receive an important Conacyt Grant for basic science research.

September, 2014:﻿
-Article published in Phys. Rev. Lett. (see publications). A GRAIN-FILLED BALL ON A VIBRATED PLATE: STATIONARY BOUNCING MODES. (2014).
-Pacheco-Vázquez  was awarded by the national council of science with the level SNI I from 2015 to 2018.

July, 2014:
- F. Pacheco was awarded as the outstanding poster, regarding his recent research, in the School of Hands on Research in Complex systems 2014, in Trieste, Italy.

January, 2014:
GrainsLab opening, with the aim of producing original and high level research in Physics of Granular Matter.
Our high speed camera (photron SA3) arrived to the lab. ﻿